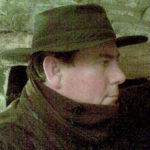 Matthew G Rees grew up in a Welsh family in the Marches.  In his early career he was a newspaper journalist.  Later he entered teaching, working for a period in Moscow.  Diverse other employment has included time as a night-shift cab driver.  His writing has appeared in a variety of publications.  He is known for literary fiction that leans to the supernatural.  His first short story collection ‘Keyhole’ (Three Impostors press) was published to critical acclaim in 2019.  He has a PhD in Creative Writing from the University of Swansea.