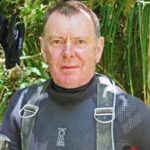 Martyn Farr (1951, E) was born in Crickhowell and is a leading exploratory cave diver, known for his record-breaking cave dives and the exploration of many miles of previously undiscovered underground passages (e.g. in Ogof y Daren Cilau and Noon’s Hole).  As an author and photographer he has written many books on the subject of cave diving history and techniques and caving locations. He began caving in 1961 and cave diving in 1971, and within 10 years had established a world record for underwater cave penetration in the Bahamas. He has explored Wookey Hole (1977 and 1982), Llangattock Mountain (1986) and Pollatoomary cave, Republic of Ireland (1978). Farr also owns Cwmdu Campsite, in the Brecon Beacons National Park. Farr is the author of The Darkness Beckons, regarded as the definitive book on the history of UK cave diving.