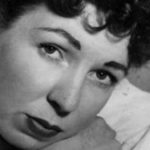 Lynette Roberts (1909 – 1995) was a poet and writer born in Buenos Aires, Argentina to Welsh parents. Her poems were about war, landscape, and life in the small Welsh village where she lived. She published two poetry collections: Poems (1944) and God with Stainless Ears: A Heroic Poem (1951). Roberts’s work was admired by poets: T.S. Eliot, Dylan Thomas and Robert Graves. In later life, Roberts had a mental breakdown and stopped publishing. Her work was largely forgotten for the remainder of her life. She died in 1995 relatively unknown.