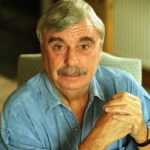 Leslie Thomas (1931 – 2014) was born in Newport, Monmouthshire. He was orphaned at the age of 12, when his mariner father was lost at sea and his mother died only a few months later from cancer. He was subsequently brought up in a Dr Barnardo’s home; the story of this upbringing was the subject of his first, autobiographical, book, This Time Next Week. In 1949 he was called up for National Service and embarked on a two-year tour of duty in Singapore with the Royal Army Pay Corps. While there he was briefly involved with the military action against communist rebels in the Malayan emergency. He also began to write short articles for publication in English newspapers. His novels about 1950s British National Service such as The Virgin Soldiers spawned two film versions, in 1969 and 1977, while his Tropic of Ruislip and Dangerous Davies, The Last Detective have been adapted for television.