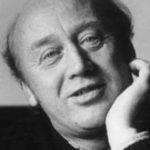 George Leslie Norris (1921 – 2006), was born in Merthyr and became a prize-winning poet and short story writer. Leslie grew up in Wales during the Great Depression. When he was nineteen years old he joined the Royal Air Force during the Second World War. In May 1940 he trained as a pilot but he got blood poisoning and was discharged in June 1941. He always wanted to be a poet after hearing Dylan Thomas and Vernon Watkins read and he went on to win many prizes in literature. He taught in the UK and America for many years.