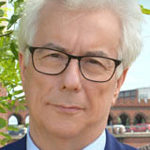 Ken Follett (1949, E) is an author of thrillers and historical novels who has sold more than 160 million copies of his works. In the USA, he often reaches the number 1 position on the New York Times Best Seller list, with titles such as Edge of Eternity, Fall of Giants, A Dangerous Fortune, The Key to Rebecca, Lie Down with Lions, Triple, Winter of the World, and World Without End. Born in Cardiff he moved to London at ten years old but returned to work on the SW Echo in 1970. He began writing fiction during evenings and weekends as a hobby. Success came gradually, but the 1978 publication of Eye of the Needle, which became an international bestseller and sold over 10 million copies, made him both wealthy and internationally famous. He is one of the world’s best selling authors and is a strong supporter of the Labour Party as well as a member of various organisations that promote literacy and writing.