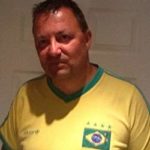 Keith Haynes (1963, E), was brought up in Northampton and London but moved to Haverfordwest in 1977. He is an author and musician. There he formed punk rock band Picture Frame Seduction. In 1980 he appeared on the compilation album Demolition Blues with the song “Getcha Rocks Off”. This is referenced in an interview with Haynes and ex-manager Jan Molby by BBC Radio Wales in 2002 after his football supporters group based in Gloucester assisted local fans in ousting then Swansea City owners from the club. Haynes published his first book, titled ‘Come on Cymru’ in 1998 and his second, in 1999. He has since written books on professional and international footballers and on local history. He has also broadcast for the BBC in Wales and written for mainstream newspapers and publications including The Daily Mirror.