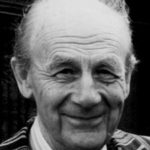 Jonah Jones (1919 – 2004) was born in County Durham but was known as a Welsh sculptor, writer and artist-craftsman.  He worked in many media, but is especially remembered as a sculptor in stone, lettering-artist and calligrapher.  He was also Director of the National College of Art and Design in Dublin for four years.  Registered as a conscientious objector, Jonah Jones was enlisted in the British Army as a non-combatant.  He served in the Ardennes campaign and the airdrop over the Rhine at Wesel in March 1945.  Following demobilisation in 1947, Jones’ career began in North Wales, followed soon after by a stay at the workshop of Eric Gill, where he learned the techniques of lettering and carving in stone.  He was greatly influenced by David Jones.  He also produced two published novels, a book of largely autobiographical essays, an illustrated book about the lakes of North Wales, and a biography of Clough Williams-Ellis, the architect of Portmeirion.  He spent his last fifteen years in Llandaff, near Cardiff, no longer able to do heavy sculpture, but still painting. His treatment of Welsh subject matter and working of Welsh-language texts were abiding themes throughout his half-century career in Wales.