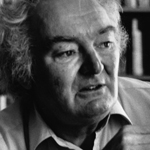 John Ormond Thomas (1923-1990, E) was born in Dunvant and studied philosophy and English at Swansea University, and at the same time studied painting at the Swansea School of Art. He worked at Picture Post in London as a staff writer and was also a sub-editor on the South Wales Evening Post. He became friends with Daniel Jones, Vernon Watkins, Fred Janes and other members of Dylan Thomas’s Kardomah gang. In July 1955 Ormond began a career with BBC Wales in Cardiff, and later became head of the BBC Welsh Film Unit. The success of ‘Borrowed Pasture’ (1960), his portrait of two Polish exiles struggling to eke out a living on a derelict farm in Carmarthenshire is still regarded as a classic of its time. Ormond ‘returned’ to poetry in the mid-1960s, his first major volume, ‘Requiem and Celebration’, was published in 1969.