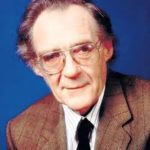 Sir John Royden Maddox, FRS (1925 – 2009, E) was a theoretical chemist, turned physicist and science writer from Penllergaer, Swansea.  Aged 15, he won a state scholarship to Christ Church, Oxford, where he read chemistry, and King’s College London, where he studied physics.  From 1949 to 1955 Maddox lectured in theoretical physics at the University of Manchester.  He then became the science correspondent at The Manchester Guardian, a post he held until 1964.  From 1964 to 1966 he was the coordinator of the Nuffield Science Teaching Project.  He was an editor of Nature for 22 years.  He condemned a book by Rupert Sheldrake (1981) that proposed the theory of morphic resonance instead of DNA as the basis for shapes and behaviour in nature.  Maddox denounced it fiercely saying: ‘Sheldrake is putting forward magic instead of science, and that can be condemned, with exactly the language that the popes used to condemn Galileo, and for the same reasons: it is heresy.’  Maddox penned an editorial in April 1983 entitled ‘No Need for Panic about AIDS’, stating that ‘the pathetic promiscuity of male homosexuals is the most obvious threat to public health, but is probably no more serious now than it was before homosexuality ceased to be illegal.’  He disputed the ‘Big Bang’ origin of the Universe.