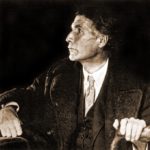 John Cowper Powys (1872 – 1963) was a British philosopher, lecturer, novelist, literary critic, and poet. Although born in Derbyshire, he lectured in England and the USA before settling in Corwen, Wales in 1935. Although Powys published a collection of poems in 1896 and his first novel in 1915, he did not gain success as a writer until he published the novel ‘Wolf Solent’ in 1929. He was influenced by many writers, particularly Thomas Hardy and the landscape plays a major role in his works. He also wrote the historical novels ‘Owen Glendower’ and ‘Porius’ which are steeped in Welsh mythology. He was seen as a controversial writer ‘who evokes both massive contempt and near idolatry’.