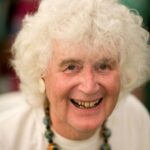 Jan Morris CBE FRSL (born James Humphry Morris, 1926 – 2020) was born in Somerset but considered herself Welsh.  A historian, author and travel writer.  She was known particularly for the Pax Britannica trilogy (1968–1978), a history of the British Empire, and for portraits of cities, including Oxford, Venice, Trieste, Hong Kong, and New York City.  She published under her birth name, James, until 1972, when she had gender reassignment surgery after transitioning from male to female.  As James Morris, she was a member of the 1953 British Mount Everest expedition, which made the first ascent of the mountain.  She was the only journalist to accompany the expedition, climbing with the team to a camp at 22,000 feet on the mountain and famously having the successful ascent announced in The Times on 2 June 1953, the day of Queen Elizabeth II’s coronation. Educated at Lancing College, then Christ Church, Oxford.  In the closing stages of the Second World War, Morris served in the 9th Queen’s Royal Lancers, and in 1945 was posted to the Free Territory of Trieste, during the joint British–American occupation.  After the war Morris wrote for The Times.  Reporting from Cyprus on the Suez Crisis for the Manchester Guardian in 1956, Morris produced the first ‘irrefutable proof’ of collusion between France and Israel in the invasion of Egyptian territory. She met a young Che Guevara in Cuba and covered the 1961 trial of Adolf Eichmann.  In 1949, Morris married Elizabeth Tuckniss, they had five children together, including the poet and musician Twm Morys.  One of their children died in infancy.  They lived together in the village of Llanystumdwy, in North Wales, for over 50 years until Morris’ death in November 2020.  In 1972, Morris travelled to Morocco to undergo sex reassignment surgery, because doctors in Britain refused to allow the procedure unless Morris and Tuckniss divorced.  Morris received honorary doctorates from the University of Wales and the University of Glamorgan, was an honorary fellow of Christ Church, Oxford, and was a fellow of the Royal Society of Literature. She accepted her CBE in the 1999 Birthday Honours ‘out of polite respect’, but Morris was a Welsh nationalist republican at heart.