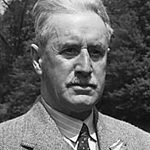 Jack Jones (1884 – 1970) was a miner, Trade Union official, politician, novelist and playwright. In 1896 he joined his father to work in the mines aged twelve. In 1901 at the age of seventeen he joined the army and was posted to South Africa with his regiment the Militia Battalion of the Welch. However he was very unhappy there and ended up deserting. Once recaptured, he was transferred to India. When he eventually returned to Wales he went back to working in the coal mines. In 1914 Jones was summoned back to his regiment and sent to the front lines in France and later on Belgium. After suffering shrapnel wounds he was invalided home. During his twenties Jack Jones began to educate himself and in 1926 he successfully entered a short play he had written entitled Dad’s Double into a competition in Manchester. He began writing seriously during a period of unemployment. His first novel, Saran, was never published, but a reduced version of it appeared as Black Parade (1935). By 1939, he had written the novels Rhondda Roundabout (1934), and Bidden to the Feast (1938), a play, Land of my Fathers (1937), and his first autobiography, Unfinished Journey (1937). The London stage version of Rhondda Roundabout was acclaimed.