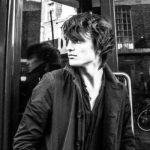 Jack Jones (1992, E) was born in Swansea and is a musician, songwriter and poet. He is the lead singer and guitarist in the alternative rock band ‘Trampolene’, and lead guitarist in Peter Doherty’s band the ‘Puta Madres’. He also performs music and spoken word poetry as a solo artist. He lives between London, Berlin and Swansea. In addition to his poems being an integral part of Trampolene as a band, Jack Jones also performs spoken word poetry as a solo artist. Dr John Cooper Clarke has described his writing as “…exceptional poetry, funny and depressing at the same time and how often can you say that.” Jones’ writing influences include Julian Cope and Dylan Thomas and according to The Musical Manual his spoken word poem Ketamine “shares stark resemblance to workings of punk-poet legend, John Cooper Clarke.”.