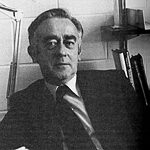 Islwyn Ffowc Elis (1924 – 2004) was one of Wales’s most popular Welsh-language writers.  Born in Wrexham, Elis was educated at the University of Wales colleges of Bangor and Aberystwyth. During World War II he was a conscientious objector and he began writing poetry and prose, winning the prose medal at the 1951 National Eisteddfod.  He became a Presbyterian minister in 1950.  His debut novel ‘Cysgod y Cryman’ was published in 1953. Translated into English as Shadow of the Sickle, in 1999, it was chosen as the most significant Welsh language book of the 20th century. In 1957, the Welsh nationalist party Plaid Cymru published his time-travel story ‘Wythnos yng Nghymru Fydd’, presenting an independent, utopian Wales and a dystopian Western England in alternative versions of 2033.  He was lecturer and reader at the University of Wales, Lampeter between 1975 and 1988.  Elis ran as Plaid Cymru’s candidate in Montgomeryshire in the 1959 and 1964 general elections.  The so-called ‘Elvis Rock’ graffito beside the A44 road in Ceredigion was originally written with the word ‘Elis’ by two of his supporters in the 1962 by-election, and subsequently altered to read ‘Elvis’.  In 2021, his novel ‘Wythnos yng Nghymru Fydd’ was translated into English by Stephen Morris and published as ‘A Week in Future Wales’ by Cambria Futura.