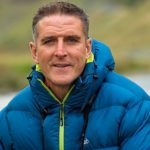 Iolo Williams (1962, EW) is a nature observer and television presenter, best known for his BBC and S4C nature shows, working in both English and his first language of Welsh. He got a degree in ecology from North East London Polytechnic before joining the Royal Society for the Protection of Birds (RSPB) in 1985, staying for 14 years working in the field and as a regional co-ordinator. In 1997 he made “Visions of Snowdonia” with BBC Wales, which followed the lives of six people living and working on the slopes of the country’s highest mountain. After making a second series, in 1999 Williams decided to leave the RSPB and pursue a full-time career in the media. He presently makes his main appearances on BBC Wales, and with wider Welsh-focused programs on S4C, in his first language of Welsh, made by independent TV company Telesgop.