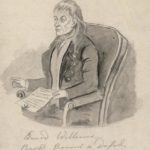 Edward Williams, better known by his bardic name Iolo Morganwg (1747 – 1826), was an influential antiquarian, poet, collector, and literary forger. He had been widely considered a leading collector of Medieval Welsh literature and expert on it, but after his death it emerged that he had forged a number of manuscripts, notably parts of the Third Series of Welsh Triads. Nonetheless, he had a lasting impact on Welsh culture, notably in founding the Gorsedd. The philosophy he developed in his forgeries had a huge impact on the early neo-druid movement. His bardic name is Welsh for “Iolo of Glamorgan” Williams first came to public notice in 1789 when he produced Barddoniaeth Dafydd ab Gwilym, a collection of the poetry of the 14th-century Dafydd ap Gwilym. Included in this were a large number of previously unknown poems by Dafydd that he claimed to have discovered; these poems are regarded as Williams’s first forgeries. His success led him to return to London in 1791. There he founded the Gorsedd, a community of Welsh bards, at a ceremony on 21 June 1792 at Primrose Hill. He organised the proceedings, which he claimed were based on ancient druidic rites.