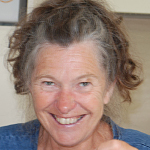 Helen May Williams (1951, E) is originally from Southport but now lives in Pendine, Carmarthenshire. She has taught at Warwick University and has written extensively on twentieth-century poetry, notably on Elizabeth Bishop, H.D., Adrienne Rich, and Ezra Pound. She founded the Carmarthen based ‘SA’ Stanza, offers Poetry Surgeries through The Poetry Society and is a Cinnamon Press mentor. In three successive years (2015-2017) her poems received a special commendation in the International Welsh Poetry Competition. Her haiku, ‘every step we take’ was commended in The Iafor Vladimir Devidé Haiku Award 2016. In 2018, her poem ‘Branwen’ received a commendation in The Grey Hen Prize. (Helen also writes as Helen May Dennis.)