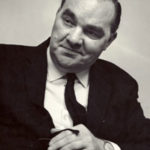 Gwyn Thomas (1913 – 1981) was a writer, dramatist, Punch-columnist, radio broadcaster and raconteur, who has been called “the true voice of the English-speaking valleys”. Born in Cymmer, Porth, the youngest of twelve children, his mother died when he was aged six, he was brought up by his sister, often with handouts from the local soup kitchen. After winning a scholarship, Thomas studied Spanish at the University of Oxford. He started writing during the depression and took teaching jobs to survive. A prolific writer his work has been produced by the BBC and in 1993 Anthony Hopkins starred as Thomas in Selected Exits, a TV production about his life.