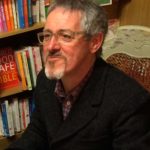 Griff Rhys Jones (1953, E) is a comedian, writer, actor and television presenter. Born in Cardiff to Welsh parents he moved to Sussex when he was six months old. He went to Cambridge, reading history and English before working on the comedy sketch show Not the Nine O’Clock News. He starred in a number of television series with his comedy partner, Mel Smith. He went on to develop a career as a television presenter and writer, as well as continuing with acting work. Rhys Jones returned to his mother’s roots in Ferndale, Rhondda Cynon Taff for an episode of the BBC One series Who Do You Think You Are?. He detailed early memories and stories of his grandparents’ fruit and vegetable shop on the high street and his mother’s childhood concert performances at Trerhondda Chapel.