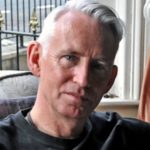 Grahame Davies (1964, EW) is a native of Coedpoeth near Wrexham, now based in Cardiff and London, he has a PhD from Cardiff University and an honorary D.Litt from Anglia Ruskin University, Cambridge, and is a Governor of Goodenough College, London.  He is a poet, author and lyricist, who has won numerous prizes.  The author of 17 books in Welsh and English, across a range of genres including poetry, social and religious history, the novel, and psychogeography.  He travels internationally as a reader and lecturer, carries out numerous high-profile poetry commissions, and collaborates extensively with musical and visual artists.