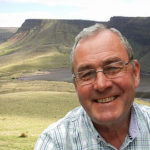 Graham Watkins spent several years researching Welsh legends and myths. He explored rugged mountains, mysterious castles, enchanting waterfalls and golden beaches to discover the tales that have been handed down from generation to generation. He collected eighty of his favourite legends in the book ‘Welsh Legends and Myths’ and that is how he began writing. His first novel ‘The Iron Masters’ was an historical novel set in Merthyr during the Napoleonic Wars when Merthyr Tydfil was rearming the British Empire, fortunes were being made through other’s sweat and anything was possible. He writes in several genres.