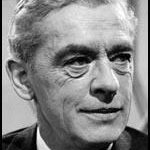 Goronwy Rees (1909 – 1979, E) was born in Aberystwyth, but later moved to Roath, Cardiff. He received three scholarships in 1927 to attend New College, Oxford, where he studied History. After leaving university, Rees wrote first for the Manchester Guardian before he became assistant editor of The Spectator.  A Marxist during most of the 1930s, he travelled to Germany, Russia, Spain, and Czechoslovakia but the Hitler-Stalin Pact turned him from Communism and led him to enlist before the UK entered the war. During World War II, he joined the Royal Artillery and rose to second lieutenant in the Royal Welch Fusiliers. In 1946, he then became an administrator for H. Pontifex & Son and started working for MI6. In 1953, Whilst principal of the University College of Wales in Aberystwyth, a series of anonymous articles appeared in ‘The People’ about Guy Burgess – a spy, blackmailer, homosexual, and drunk. The Daily Telegraph then revealed Rees was author. At the end of his life he admitted spying for the USSR for a short time, and accused MI5 man Guy Liddell of also being a spy. In 1999, Vasili Mitrokhin, former KGB member, documented Rees’s recruitment by Burgess at Oxford during the mid-1930s but said that he supplied no information to the Soviets and that he abandoned his communist affiliation at the outbreak of World War II.