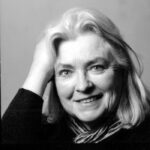 Gillian Clarke (1937, EW) was born in Cardiff and is a poet and playwright.  She graduated in English from Cardiff University, worked for the BBC for a year before teaching English. In 1990 she was a co-founder of Tŷ Newydd, a writers’ centre in North Wales.  She has published numerous collections of poetry for adults and children.  In 2008, Gillian Clarke became the third National Poet of Wales.