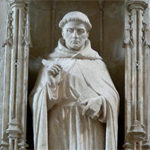 Gerald of Wales (c. 1146 – c. 1223) was born in Pembrokeshire of mixed Norman and Welsh descent.  As a royal clerk to the king and two archbishops, he travelled widely and wrote extensively.  He studied and taught in France and visited Rome several times, meeting the Pope.  He was nominated for several bishoprics but turned them down in the hope of becoming bishop of St Davids, but was unsuccessful despite considerable support.  His final post was as archdeacon of Brecon, from which he retired to academic study for the remainder of his life.  Much of his writing survives.  He wrote in Latin but had strong opinions about everything.  His ‘Itinerarium Cambriae’ and ‘Descriptio Cambriae’ tell us much about Welsh history and geography as well as the cultural relationship between the Welsh and the English.  He also noted that unlike the English, who fight for money and power, the Welsh patriots fight for their country.  He had pleasant things to say about the poetic talents of his people.