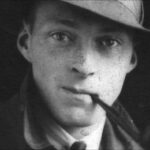 Arthur Geraint Goodwin (1903 – 1941) was a journalist, novelist and short story writer from near Newtown, Montgomeryshire, who wrote about rural life on the Welsh border. His first novel, published in 1935, was the autobiographical ‘Call Back Yesterday’. Goodwin’s most acclaimed work, ‘The Heyday in the Blood’, appeared in 1936, and his last novel, ‘Come Michaelmas’, appeared in 1939.  He worked on The Montgomeryshire Express before moving to London to work in a News Agency and later as a reporter for The Daily Sketch.