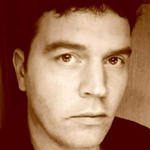 G. D. Jones (1983, E) was born in Blackburn but has lived in Bridgend for many years. A Romani gypsy, he left school at eight but with his mother’s help he improved his reading and determined to write, finally finished his first novel aged thirty-three.  He likes to ask questions about our very existence. He is author of ‘The Future Assassin’, ‘Theory Tales’ and ‘Extra Terrestrial Wrestlers’ where he attempts to answer those intriguing questions that have plagued mankind since the beginning of time. Who are we? And where have we come from? An original, fantasy short story writer. He also draws, sings and plays guitar.