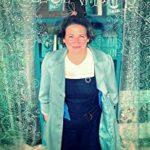 Eloise Williams was born in Cardiff but grew up in Llantrisant. She now lives in west Wales. She has an MA in Creative Media Writing with Distinction from Swansea University, a Postgraduate Diploma in Acting from Guildford School of Acting and a BA(Hons) Ed. in Drama from the Royal Welsh College of Music and Drama. She spent a decade as an actor, came second in the first ever Welsh Poetry Competition and even judged the contest in 2013. She now works full time as a children’s writer and has been called “The queen of children’s writing“.