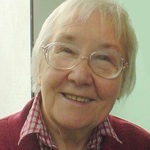 Elaine Morgan (1920 – 2013), was born in Hopkinstown, Pontypridd and was a writer for television and the author of several books on evolutionary anthropology, especially the aquatic ape hypothesis. The Descent of Woman, The Aquatic Ape, The Scars of Evolution, The Descent of the Child, The Aquatic Ape Hypothesis and The Naked Darwinist (2008) discuss the reception of aquatic scenarios in academic literature. Possibly due to her lack of scientific credentials (she had an English degree from Oxford University) the zoological community dismissed her ideas for many years. However by 2000 the scientific community had generally accepted her work to be of merit. Morgan began writing in the 1950s when she joined the BBC. They began to produce her plays for television and her list of credits is long indeed. She won two BAFTAs and two Writers Guild awards in a long and illustrious career.