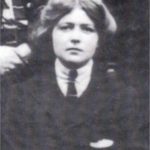 Dion Fortune (born Violet Mary Firth, 1890 – 1946) was born in Llandudno but moved to the West Country in her teens. After time spent at a horticultural college she began studying psychology and psychoanalysis at the University of London before working as a counsellor in a psychotherapy clinic. During WWI she joined the Women’s Land Army and established a company selling soy milk products. She became interested in esotericism through the teachings of the Theosophical Society, before joining an occult lodge led by Theodore Moriarty and then the Alpha et Omega occult organisation. She was involved in various cults in her life and was a prolific writer. She produced a large number of articles and books on her occult ideas and also authored seven novels, several of which expound occult themes. Fortune is recognised as one of the most significant occultists and ceremonial magicians of the early 20th century. The Fraternity she founded survived her and in later decades spawned a variety of related groups based upon her teachings. Her novels in particular proved an influence on later occult and modern Pagan groups such as Wicca.