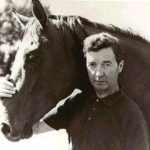 Dick Francis (1920 – 2010) was a crime writer, and former steeplechase jockey, whose novels centre on horse racing in England. Born on a farm in Pembrokeshire he moved to Berkshire as a child. His father was convinced that a good day’s hunting would teach him more than a day at school: “What he can’t learn on the back of a horse is not worth teaching,” was his motto. When the Second World War broke out he wanted to go into the cavalry, but he ended up in the RAF; commissioned as a pilot in 1943, he flew Wellingtons and then Lancasters. Francis wrote more than 40 international best-sellers. His first book was his autobiography The Sport of Queens (1957), for which he was offered the aid of a ghostwriter, which he spurned. The book’s success led to his becoming the racing correspondent for London’s Sunday Express newspaper, and he continued in that job for 16 years. He set his first thriller, Dead Cert published in 1962, in the world of horse racing, establishing a specialized niche for his work.