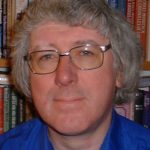 David Langford (1953, E) was born in Newport and began his career as a weapons physicist at the Atomic Weapons Research Establishment at Aldermaston. In 1985 he set up a software company with science fiction writer Christopher Priest, called ‘Ansible Information’. Langford is noted for his parodies. A collection of short stories, parodying various science fiction, fantasy fiction and detective story writers has been published as ‘He Do the Time Police in Different Voices’ (2003). Two novels, parodying disaster novels and horror, respectively, are ‘Earthdoom!’ and ‘Guts!’, both co-written with John Grant. He has won numerous Hugo Awards for his work.