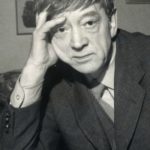 Walter David Jones (known as David Jones, 1895 – 1974) was a painter, engraver and one of the first-generation British modernist poets. As a painter he worked chiefly in watercolour, painting portraits and animal, landscape, legendary and religious subjects. As a writer he was considered by T. S. Eliot to be of major importance, and his work The Anathemata was considered by W. H. Auden to be the best long poem written in English in the 20th century. Jones enlisted with the Royal Welch Fusiliers and served on the Western Front from 1915 to 1918. His experiences in the trenches were to prove important in his later painting and poetry, especially his involvement in the fighting at Mametz Wood. He suffered nervous breakdowns and although begun much earlier it wasn’t until 1937 that his In Parenthesis was finally published by Faber & Faber. It is regarded by many as the greatest war poetry ever written. In 1938 T. S. Eliot called In Parenthesis a ‘work of genius’, and Graham Greene, in 1980, “among the great poems of the century”. In 1962 Igor Stravinsky considered Jones “perhaps the greatest living writer in English”, and in 1964 Herbert Read called him “one of the greatest writers of our time”.