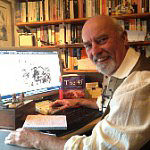 David Ebsworth (1949, E) was born in Liverpool but moved to Wrexham, where he has lived for forty years. He began to write seriously in 2009 and published his first book, ‘The Assassin’s Mark’ about the Spanish Civil War in 2013. He has since written several historical novels on 6th Century Britain, the Battle of Waterloo, the Jacobite Rebellion of 1745, the Spanish Civil War and the Anglo-Zulu War. He is a member of the Historical Novel Society, the International Brigades Memorial Trust, the Anglo-Zulu War Historical Society, New Writers UK, and the Alliance of Independent Authors. He also helps organise the Wrexham Writers Group and the Wrexham Carnival of Words.