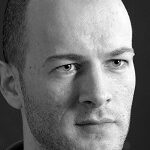 Dave Franklin (1971, E) is an Usk-born, intentionally offensive scribe whose work encompasses everything from hardcore porn and the absurdities of Islam to spree killers and the joyful dismemberment of critics. His Welsh heritage is best reflected in earlier novels such as Looking For Sarah Jane Smith & Manic Streets of Perth. He published his first story in a national fishing magazine at the age of sixteen. He immigrated to Australia in 1999 and worked as a reporter for a Perth-based newspaper group. He then spent nearly three years teaching English in South Korea, and now teaches ESL to adults in Brisbane, helping (among others) Thai Lady Boys get to grips with their past participles. The major theme of Dave’s small, character-driven stories is alienation, the symptoms of which include male immaturity, misogyny, dysfunction, xenophobia, self-destruction, religion, violence and a childish glee in winding up the politically correct. There are no car chases or explosions in his books; instead he prefers graphic, twisted sex scenes while focusing on exasperated loners full of doubt. Readers who like his work tend to see its black comedy (and disdain for his own characters) whereas his harshest critics take everything at face value. Indeed, some observers would suggest that the highlight of his writing career, which has seen him produce ten novels, remains being published in a fishing magazine.

Plus various other anthologies, novellas and short stories.