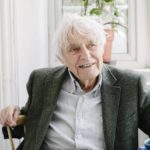 Dannie Abse (1923 – 2014, E) was born in Cardiff to a Jewish family. Although best known as a poet, Abse worked as a doctor for over thirty years. He received numerous literary awards and fellowships for his writing. His first volume of poetry, After Every Green Thing, was published in 1949. His autobiographic work, Ash on a Young Man’s Sleeve, was published in 1954. He won the Cholmondeley Award in 1985. He was a Fellow of The Royal Society of Literature from 1983. In a foreword to Collected Poems 1948–1976, Abse noted that his poems are increasingly “rooted in actual experience,” both domestic and professional, and many display a reconciliation between Jewish and Welsh themes and traditions. In 2009 Abse brought out a volume of collected poetry. In the same year, he received the Wilfred Owen Poetry Award. Abse was a judge for the inaugural 2010 Hippocrates Prize for Poetry and Medicine. Abse was appointed Commander of the Order of the British Empire (CBE) in the 2012 New Year Honours for services to poetry and literature.