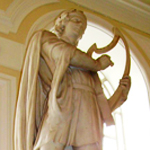 Dafydd ap Gwilym (c. 1315/1320 – c. 1350/1370, W) is regarded as one of the leading Welsh poets and amongst the great poets of Europe in the Middle Ages. Tradition has it that he was born at Brogynin, Penrhyn-coch, Ceredigion. As one of noble birth it seems Dafydd did not belong to the guild of professional poets in medieval Wales, and yet the poetic tradition had been strong in his family for generations. He may have died a possible victim of the Black Death. Tradition says that he was buried within the precinct of the Cistercian Strata Florida Abbey, Ceredigion, although this is disputed by supporters of the Talley Abbey theory. In 1984 a memorial stone was unveiled to mark the site in the churchyard at Talley where the poet may be buried. It is believed that about one hundred and seventy of his poems have survived, though many others have been attributed to him over the centuries. His main themes were love and nature.