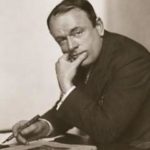 Dominic Bevan Wyndham Lewis FRSL (1891 – 1969) was a journalist, author and biographer, known for his humorous newspaper articles.  Born to a family of Welsh origin then living in Seaforth.  After schooling in Cardiff, he served in the Welch Regiment during World War I.  He twice suffered from shell-shock while serving in France and contracted malaria on being assigned to Macedonia.  After the war he took up journalism and joined the Daily Express, where he was briefly the newspaper’s Literary Editor.  In 1919 he was put in charge of the paper’s humorous ‘By the Way’ column and adopted the pen name Beachcomber.  He then moved on to the Daily Mail, where he contributed a column called ‘At the Sign of the Blue Moon’.  He lived in Paris from the mid-1920s while doing historical research for his entertaining biography of François Villon.  Later biographies of French subjects included Louis XI, the Emperor Charles V, Ronsard, Molière, Rabelais and Gilles de Rais.  He also wrote works on Boswell, Goya and Cervantes.  After returning to Britain, Lewis published as ‘Mustard and Cress’ in the Sunday Referee and then returned as a columnist to the Daily Mail.  In addition, he co-wrote, with Charles Bennett, the screenplay for the first version of Alfred Hitchcock’s ‘The Man Who Knew Too Much’ (1934).  He also supplied the lyrics for the Storm Clouds Cantata, featured in the film’s climatic Albert Hall scene.  This was followed by various other British film scripts during the 1930s.  Wyndham-Lewis also made a name for himself as a compiler of the facetious anthology ‘The Stuffed Owl’, co-edited with Charles Lee in 1930.