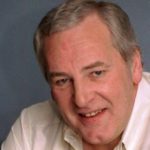 Craig Thomas (1942 – 2011) was from Cardiff and is famous for the Mitchell Gant and Kenneth Aubrey series of novels. He graduated from University College, Cardiff in 1967, and became an English teacher. Thomas wrote part-time, with his wife as editor, in two fields: philosophical thoughts in books of essays; and techno-thrillers, a genre whose invention is often attributed to the better-known Tom Clancy, though many fans feel that Thomas was its true originator. Most of Thomas’s novels are set within MI6. His best-known novel was ‘Firefox’, which brought him to global prominence and spawned a successful film adaptation, directed by and starring Clint Eastwood.