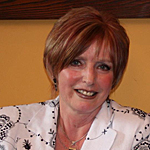 Carol Ann Wright (1945, E) moved to Wales in 1996 and trained as a psychotherapist, gaining a Masters in 2003. Her first book was published in 1989, under my own name but in 2009, under a pseudonym, she wrote her autobiography that was immediately a Sunday Times best seller and is still selling in four languages. She followed this up with a sequel, concentrating on one aspect of her story. She is now semi retired and concentrating on writing, about to embark on her first novel.