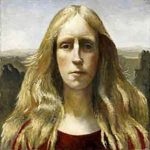 Brenda Chamberlain (1912 – 1971) was born in Bangor. Her father worked for the railway. Her mother for Bangor Borough Council.  She studied art at the Royal Academy in London and was an artist, poet and novelist.  She also wrote a memoir of the fifteen years she spent living on Bardsey Island.  With her artist husband John Petts she ran the Caseg Press from their home, a cottage they shared in Tyn-y-mynydd, which now bears a plaque commemorating their work there. She also produced prose works, including a novel ‘The Water Castle’ and ‘The Tide Race’.  Chamberlain won the first two Gold Medals ever awarded by the National Eisteddfod of Wales for Fine Art, in 1951 for the painting ‘Girl with a Siamese Cat’ and in 1953 for ‘The Cristin Children’.  In 1961 she went to live on the Greek island of Hydra, returned to Wales in 1967 but died in 1971 after an overdose of sedatives.