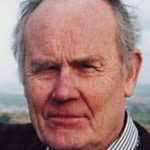 Bernard Henry Knight (1931, E) was born in Cardiff and is a forensic pathologist and writer. He graduated from Welsh National School of Medicine in 1954 and served in Malaya as a captain. He became a Home Office pathologist in 1965 and was appointed Professor of Forensic Pathology, University of Wales College of Medicine, in 1980. In his thirty-one years in that role, he conducted over 25,000 autopsies. He was involved in a number of high-profile cases, including that of the serial killers Fred and Rosemary West. He has been writing since before 1963, when his first crime novel was published. Since then, he has written about thirty books, including contemporary crime fiction, historical novels about Wales, biography, non-fiction popular works on forensic medicine, twelve medico-legal textbooks and the Crowner John Mysteries series of 12th-century historical mysteries featuring one of the earliest (fictional) coroners in England.