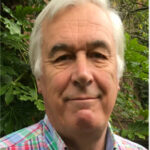 Professor Anthony Campbell (1945, E) was born in Bangor, but grew up in London. He obtained a first class degree and PhD at Cambridge University in Natural Sciences, and moved to Cardiff in 1970 as lecturer at the Welsh National School of Medicine. He is an international authority in bioluminescence, and intracellular calcium. One of his inventions, using chemiluminescence, is now used in several hundred million clinical tests per year worldwide, and was awarded the Queen’s Anniversary Prize in 1998. He has written six technical books, and over 250 papers in international journals. His latest book – ‘Mirror Image’ – is a scientific mystery based in Anglesey, a place he has loved all his life. He won the Inspire Wales award for Science and Technology in 2011. He is a Fellow of the Linnean Society, a foreign member of the Royal Society of Sciences in Uppsala, Sweden, and a Fellow of the Learned Society of Wales. He founded the Darwin Centre in Pembrokeshire in 1994, to excite young people about science and natural history.