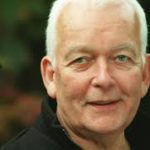 Andrew Davies (1936, E) was born in Rhiwbina, Cardiff and is a prolific writer of screenplays and novels, best known for ‘House of Cards and ‘A Very Peculiar Practice’, and his adaptations of ‘Vanity Fair’, ‘Pride and Prejudice’, ‘Middlemarch’, and ‘War & Peace’. He attended Whitchurch Grammar School in Cardiff and then University College, London, where he received a BA in English in 1957.  He was made a BAFTA Fellow in 2002.  He is now best known for his adaptations of classic works of literature for television including ‘Pride and Prejudice’ (1995) starring Colin Firth and Jennifer Ehle, ‘Vanity Fair’ (1998), and ‘Sense and Sensibility’ (2008).  He is also a prolific writer for children.  The first of his novels was ‘Conrad’s War’, in 1978.  Davies won the annual Guardian Children’s Fiction Prize, which is judged by a panel of British children’s writers and recognises the best book by an author who has not yet won it.