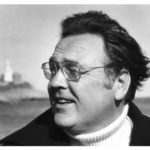 Alun Richards (1929 – 2004), was born in Pontypridd, at the start of a decade of depression in Wales. His father abandoned his mother three days after Richards’ birth, and never returned; close relatives and older school friends were killed in the war; and his own academic career, shaky at best, took him into teacher training and naval service as an instructor lieutenant. He published four novels from 1963 to 1973, that established his reputation. He was a regular scriptwriter for the 1970s BBC hit, The Onedin Line, and offers of lucrative film work followed. Richards moved from Cardiff to the Mumbles, where he would entertain friends with hilarious tales of pals like Peter O’Toole and Kenneth Griffith, and exotics like Sam Spiegel. As editor of The Penguin Book Of Welsh Short Stories (1976), Richards was enormously influential in bringing work about Wales to the attention of a wider world. He also wrote a sparkling rugby history, A Touch of Glory (1980), and a sensitive biography of his friend Carwyn James (1984).