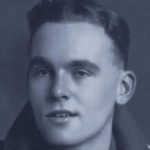 Alun Lewis (1915 – 1944) was born in Cwmaman, Aberdare. He won a scholarship to attend Cowbridge Grammar School, and went on to study at Aberystwyth University and the University of Manchester. After the outbreak of the Second World War Lewis first joined the British army’s Royal Engineers in the ranks because he was a pacifist who wanted to help the defeat of fascism. However, he then inexplicably sought and gained a commission in an infantry battalion. His first published book was the collection poetry Raider’s Dawn and other poems (1942). In 1942 he was sent to India with the South Wales Borderers. His poems about his war experiences have been described as showing “his brooding over his army experiences and trying to catch and hold some vision that would illuminate it’s desolation with meaning“. Lewis died on 5 March 1944 in Burma. He was found shot in the head, with his revolver in his hand, and died from the wound six hours later. Despite it being a case of suicide, an army court of inquiry charitably concluded that he had tripped and that the shooting was an accident.