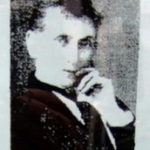 Allen Raine (1836 – 1908) was born in Newcastle Emlyn. Allen Raine was a pseudonym for Anne Adalisa Beynon Puddicombe. Her novels had sold more than two million copies by 1912. Educated in the ministry at Cheltenham she mixed with literati such as George Eliot, Mrs Henry Wood, and Bulwer-Lytton. She later lived in the suburbs of London with her sister Lettie. Returning to Wales in 1856 she married the banker Beynon Puddicombe at Penbryn Church, Tresaith, Cardiganshire, on 10 April 1872. He was the foreign correspondent of Smith Payne’s Bank, London. They lived in the London area until February 1900 when her husband became mentally ill. She eventually returned to her Welsh roots and Wales features largely in her romantic fiction, with titles like ‘A Welsh Singer’ (1896) and ‘A Welsh Witch’ (1902).