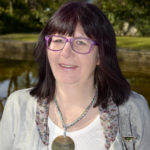 Alison Layland (1964, EW) is a writer and translator, and has told herself stories for as long as she can remember, though she first started writing them down when she moved to Wales in 1997 and a Welsh language course morphed into creative writing classes. She won the short story competition at the National Eisteddfod in 2002. She studied Anglo-Saxon, Norse and Celtic, and after a brief spell as a taxi driver worked for several years as a chartered surveyor before returning to her first love – language. As well as writing, she translates from German, French and Welsh into English, and her published translations include a number of successful novels.