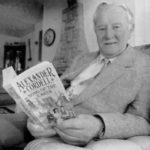 Alexander Cordell (1914 – 1997) was the pen-name of George Alexander Graber, a prolific novelist and author of thirty acclaimed works including Rape of the Fair Country, Hosts of Rebecca and Song of the Earth. Born in Ceylon he moved to Abergavenny and had a deep affection for Wales. His ‘Mortymer Saga’ portrays the turbulent history of early industrial Wales. Faithful to historical fact, he presents events like the birth of trade unionism and rise of the Chartist movement and the Newport Rising. His international best-selling book about the ‘valleys’, Rape of the Fair Country, put Blaenavon on the world map some fifty years before it was designated a World Heritage Site. He is without doubt one of the world’s greatest novelists.