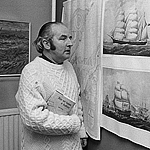 Aled Eames (1921 – 1996) was born in Llandudno. He joined the Royal Navy in the Second World War and reached the rank of lieutenant, having been twice mentioned in despatches. He then studied at the University College of North Wales, the forerunner of Bangor University, whose staff he joined as an education lecturer and as warden of Neuadd Reichel hall of residence for twenty years. In 1955 he was awarded the Prince Llywelyn ap Gruffydd Prize for his thesis “Sea Power and Welsh History during the Reign of Charles I”. His research interests focused on Welsh merchant shipping in the 18th and 19th centuries. He visited the Canadian Maritime Provinces and parts of the United States on a study trip in 1981. He was one of the founders of the annual publication Cymru a’r Mor/Maritime Wales in 1976. He also worked on television, for instance on the series of BBC2 films Tradewinds (1986) and several Welsh-language programmes.